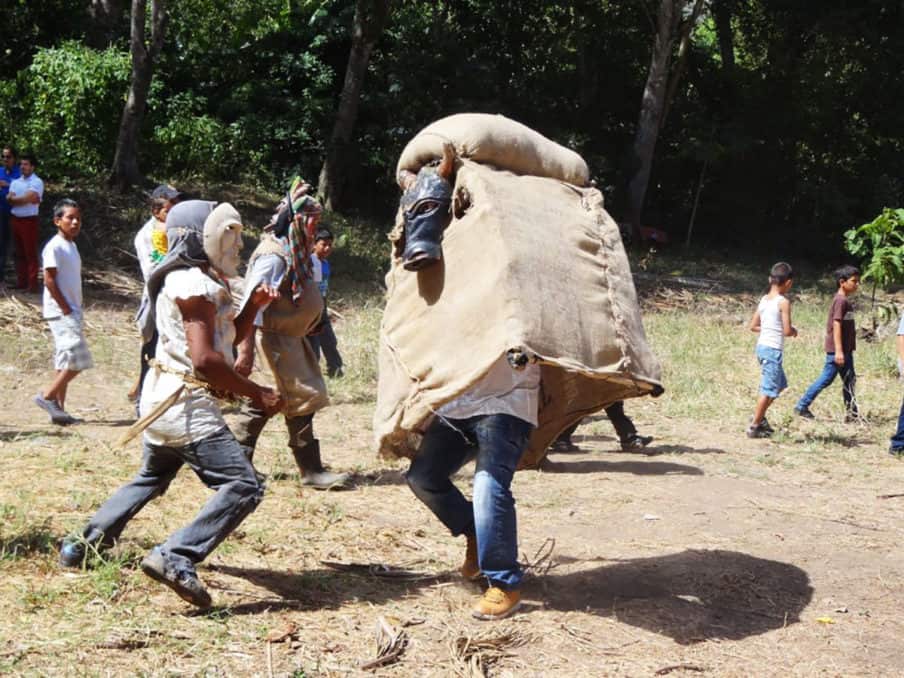 The Fiesta Danza de Los Diablitos, is a traditional dance done by Costa Rica’s indigenous Boruca tribe. Its a dance that conveys the cultures, stories, traditions and history of this indigenous tribe of Costa Rica

Dance is a medium that doesn’t get as much attention as other works of art do. When in the right hands, it can be just as expressive as other art mediums, sometimes even more so. In Costa Rica this is indigenous expression of art is best displayed during the Danza de Los Diablitos.

Despite it being a 500-year old tradition, not many people living outside of Costa Rica know about it. Today, we’ll try to change that. Here is everything you’ll need to know about the Dance of the Little Devils.

The Fiesta Danza de los Diablitos is a festival that is held annually by the Boruca people of Costa Rica. The centerpiece for the whole celebration is the actual dance, which shares the name of the festival itself. It was meant to commemorate the Boruca tribe’s victory against the Spanish Conquistadors that attempted to subjugate their people.

Diablitos came from the name that the Spanish called the natives, as they believed them to worship the devil, since the Boruca were not baptized in the Catholic church.

Instead of being offended, however, the Boruca embraced this moniker, and every festival, they dress up in various carved wooden masks that resemble the devils that the Spanish named them after.

These masks are hand-crafted from local resources and designed with feathers, leaves, and other materials. Aside from the masks, the Boruca also use body paint for their presentation and wear clothes made from cloth sacks.

When is the Danza de Los Diablitos?

If you’re in Costa Rica for Christmas or the New Year, then you’re in luck. The Danza de los Diablitos is held for a total of 3 days every year. The festivities starts on December 30 and ends on January 2. During these three days, the Boruca tribe will dance almost non-stop, with only very few breaks in between.

The festival starts on December 30, when all the men involved in the festival will gather in the local mountain for the chief Diablo. The chief Diablo is usually a tribal elder and is in charge of directing the entire festival.

Once everyone is in place, the elder will blow a conch to signify that the celebrations have begun. Church bells will also ring in the village to inform the rest of the tribe.

The Diablitos will then make their way from the mountain and into the village while dancing and playing music from their drums and flutes. The Diablitos will continue to dance until 2 am the next day, where they will take a short break before the festivities will resume in the morning.

At 9 am on the 31st, the torro, or bull, is introduced, which represents the Spanish. The Boruca men will take turns wearing the bull costume, where they will then be chased around the village by the rest of the Diablitos where they will do a mock battle. This stage will last for the next couple of days until January 2. The Bull will eventually win and will “kill” all the Diablitos, not literally of course.

The bull costume, except for the mask, will be burnt, which symbolizes the enduring nature of the Boruca tribe over the Spanish Empire.

The History of the Dance

The Dance of the Little Devils has only been performed as a festival fairly recently, but the story behind it dates back more than 500 years. It was first created as a way to scare off the invading Spanish.

Skirmishes have occurred between the tribe and the Spanish, and despite the conquistadors being more advanced in terms of weaponry and tactics, the Boruca Tribe managed to prevail relatively intact for hundreds of years.

After a while, the ritual itself has become less of a way to intimidate their enemies and more of a celebration of the preservation of Boruca culture despite all odds.

Who are the Boruca People of Costa Rica?

The Boruca are a group of indigenous people living in Costa Rica, mainly on its Pacific coast. Despite numbering only around 2,600 individuals nowadays, they used to dominate Costa Rica for centuries before the Spanish came.

The Boruca themselves are a strong, proud people who have been used to defending their lands from other great civilizations, like the Aztecs. The Spanish was but a more recent addition to a long list of enemies the Boruca had to fight against.

The Boruca peoples are known for their craftwork, especially their art and their weaving. Their woodworking traditions is what makes the Diablito masks a reality. The Boruca also have their own distinct language, which is now almost extinct.

Currently, the majority of the Boruca population are living in a native reservation in the Puntarenas Province, close to the Costa Rican border with Panama. Many of its tribal members subsist on selling their crafts to tourists, especially textile and the masks worn during the Danza de los Diablitos.

The Boruca masks used for the Danza de los Diablitos is a tradition that has been passed down orally through the generations. Mask carving itself is considered a dying art, and many of the elders who are responsible for creating these works of art are hard-pressed to pass this tradition on.

The masks themselves are made from balsa wood and are carved using traditional tools and painted with traditional pigments. It is then adorned with feathers, banana leaves, and many others. Boruca masks take the form of humans with exaggerated expressions, animals like eagles and jaguars, and of course, the devils they are meant to represent.